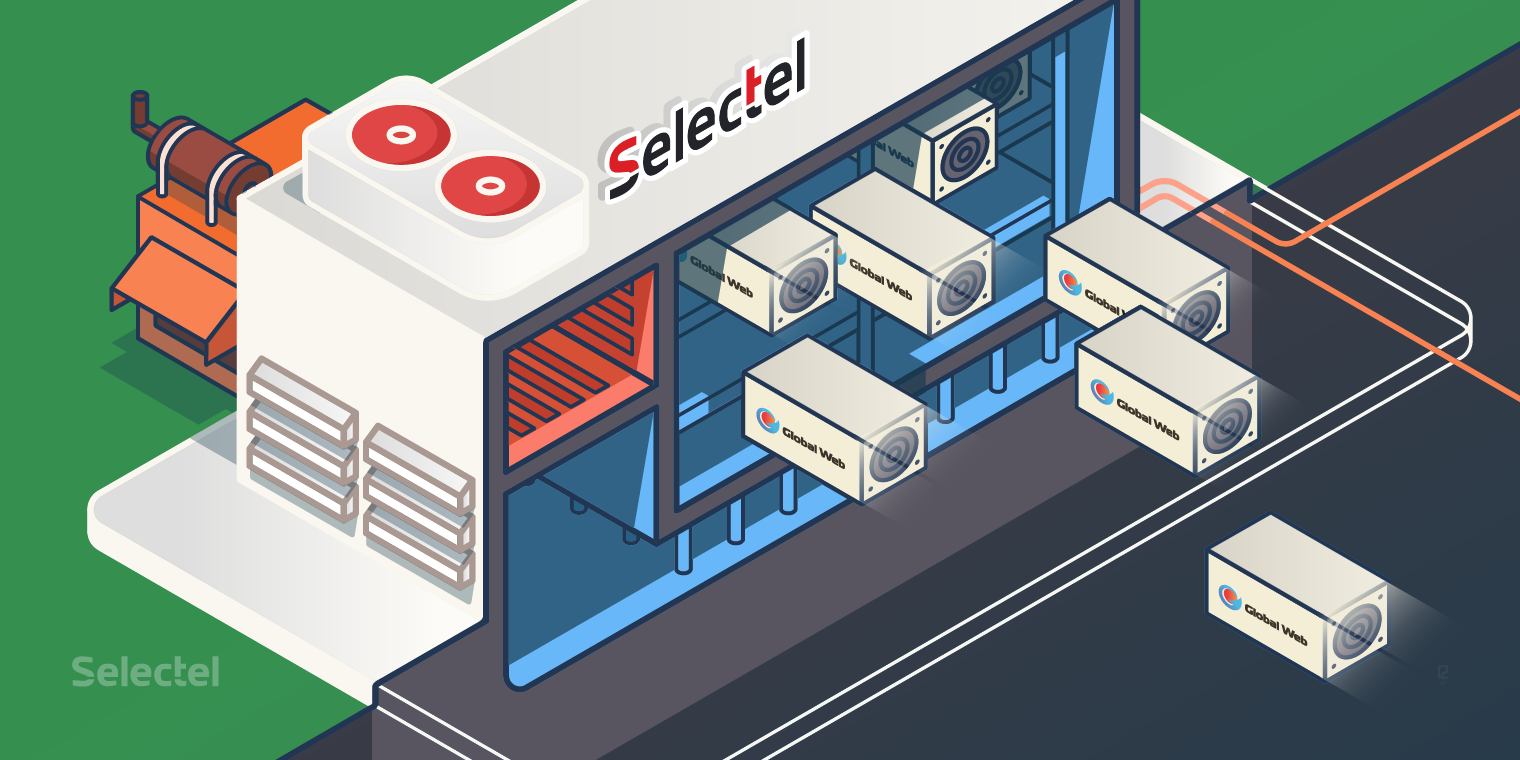 Cryptocurrency mining has become a major trend over the past few years. Conversation in the infosphere have covered everything from how to host irregular equipment to how legal it is.

There are two ways to get cryptocurrency:

Owners of “rigs” (mining stations that perform calculations) are rewarded in cryptocurrency (bitcoin, ethereum, etc.). At the very start of the “Bitcoin era”, all a miner needed was a basic home computer and then video cards. Due to the growing complexity of the operations being performed, cryptocurrency today can only be generated by special equipment. This naturally leads to a few questions:

In December 2017, Selectel entered the first stage of its major mining colocation project. The client was Global Web, which provides a wide range of IT solutions.

Global Web has its own data center with 50 server cabinets. As these are for hosting telecom and server equipment, they decided to use Selectel’s resources to implement their project. 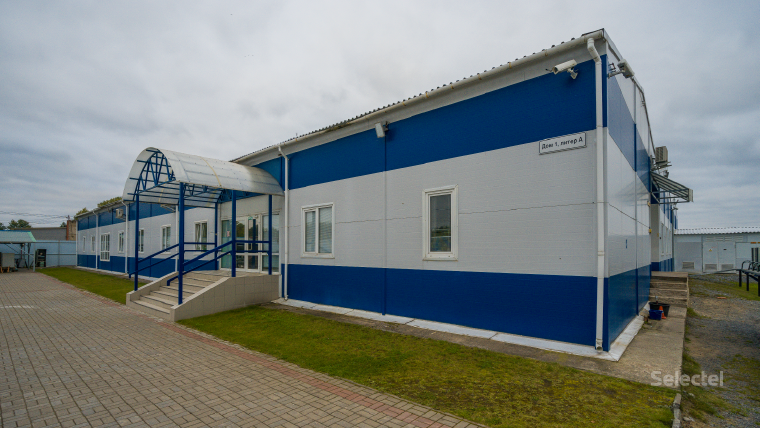 These kinds of projects have the following requirements:

“For our project, the reliability of the IT infrastructure, fault tolerance of all nodes, price, and electrical quality all play an important role,” says Global Web Group CTO Aleksandr Surmenok. “A key factor in our decision was the availability of necessary, specially prepared areas for colocation and future development in the data center, as well as the potential for additional power. After comparing different providers, we settled on Dubrovka 3.”

“Selectel quickly responded to the global market trend of industrial cryptocurrency mining by allocating substantial floor space in one of our data centers for it.”

Dubrovka 3 is one of three data centers located on a five hectare plot in Nevskaya Dubrovka. Its total area is 1,716 m2, of which 800 m2 are server rooms. Everything on the territory is Selectel property, which is a significant advantage when it comes to infrastructure reliability. In Russia, the majority of data centers are located on rented territory, which means they depend on property owners. The Dubrovka data center campus and surrounding area is enclosed and equipped with security systems and video surveillance. Security guards are located at the entryway to the property and access control and monitoring systems prevent unauthorized data center access.

The data center was designed for 2,500 kW total facility power. Electricity is received from two independent feeds from the city grid, which lead to two transformer substations. From the substation, power passes to the uninterruptible power supplies (UPS), where AC is transformed and interference removed. If the data center were ever cut off from the city feeds, UPS clusters would power the data center using storage batteries until the diesel generators took on the full workload. 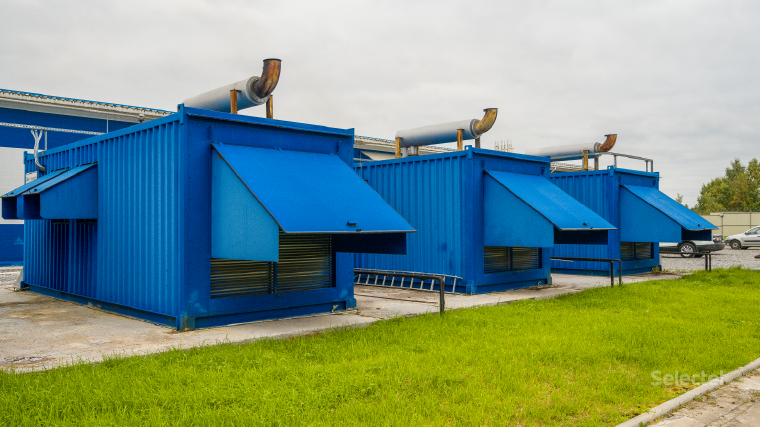 Diesel generators have N+1 redundancy, meaning three generators are enough to fully power the data center: two primary generators and one backup. A 48-hour fuel supply is kept on hand, and in the event of a lengthy blackout, service agreements have been signed with fuel suppliers for emergency fuel deliveries. On average, it takes about three minutes to start and halt the generators. A series of measures are in place to keep the generator and fuel temperature above freezing during the winter; this ensures the generators can always start. Information pertaining to electrical systems, including the generators, is displayed on large screens in the monitoring and dispatch center. Employees also make regular rounds of the facilities.

For most of the year, the climate in Northwestern Russia permits natural air conditioning, which is why this location dictates free cooling.

The key concept behind our Dubrovka data centers is the rational use of energy, which is where 50% of data center operating expenses goes. Here, like in our other data centers, we apply the idea of differentiating and optimizing infrastructure solutions. This allows us to implement projects with different levels of complexity and workloads. Along with traditional N+1 and 2N redundancy systems; new redundancy schemes are applied: 4/3N and 3/2N. 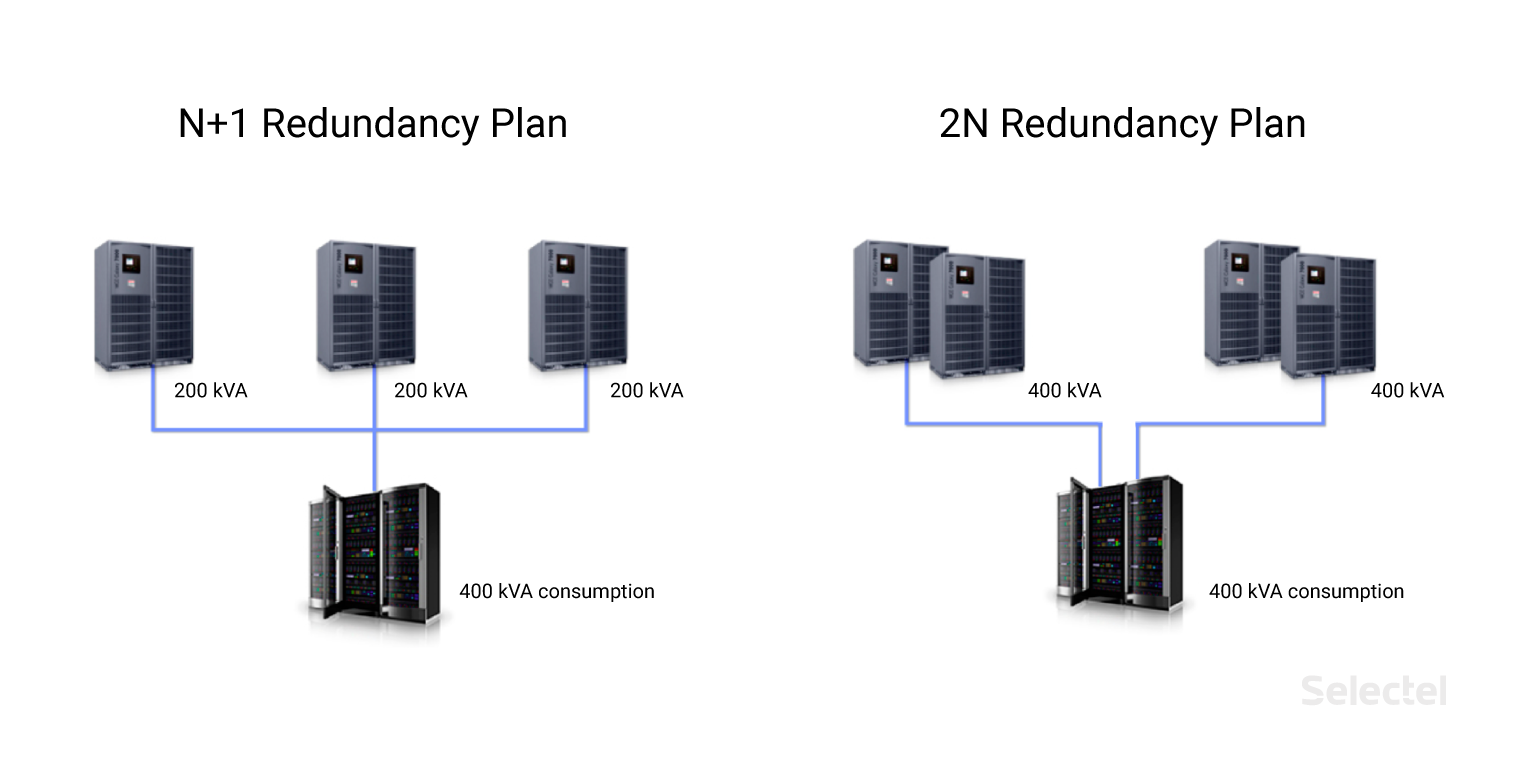 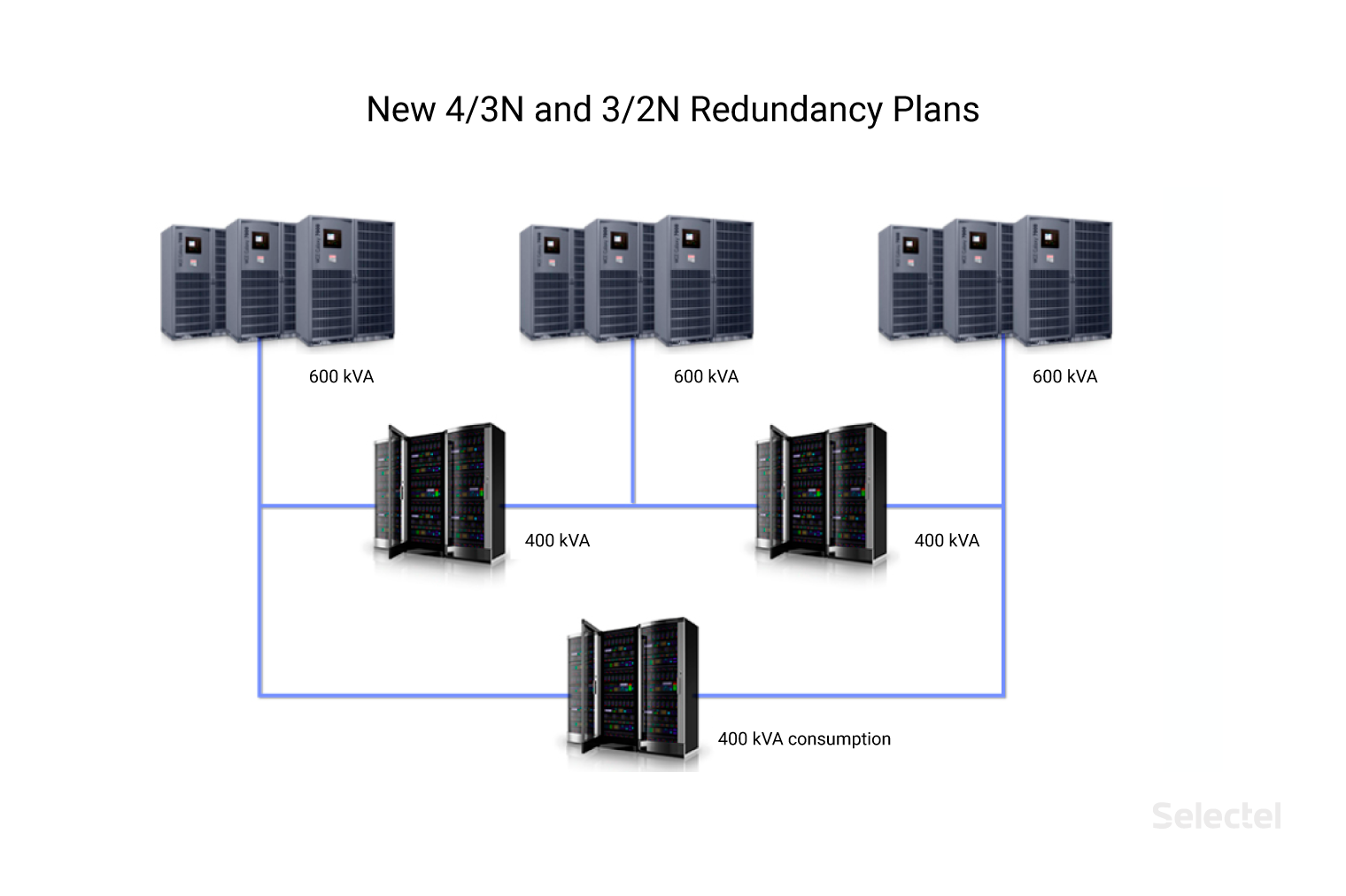 10 kW of power are allocated to each section, and this can be increased if need be. Mining equipment requires a lot of electricity: from 1 to 3 kW per unit, and consequently, they create a proportionate amount of heat. Shelves were used to provide more effective cooling and heat removal than traditional racks. 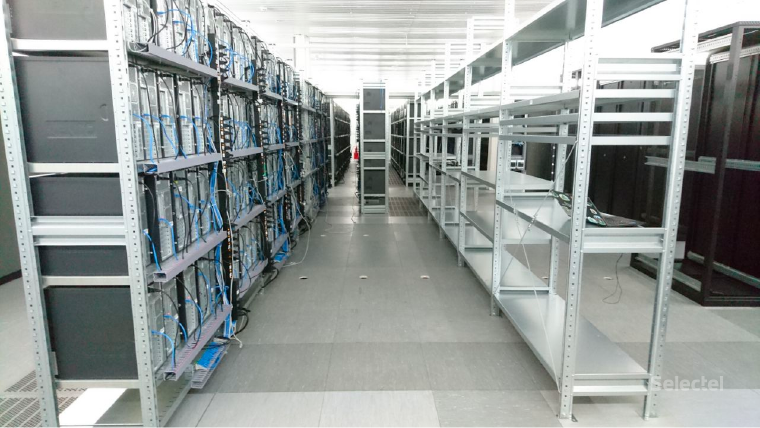 When hosting equipment, the use of certified power supplies and cords is of the utmost importance.

“We pay careful attention to fire security in our data centers and to our clients’ equipment,” says Selectel CTO Kirill Malevanov. “If a device consumes over 2kW, we require two power supplies with C13 connections and PCT certified power cords.”

The large number of home-made devices creates another issue. This equipment isn’t installed for security purposes.

Each farm in colocation is given a 100 Mbps Internet channel, which is provided by an RJ-45 connection to an Internet switch.

Selectel is ready to host farms with up to 20 devices a week.

In the industry, PUE and DCIE indicators are used to determine energy efficiency: 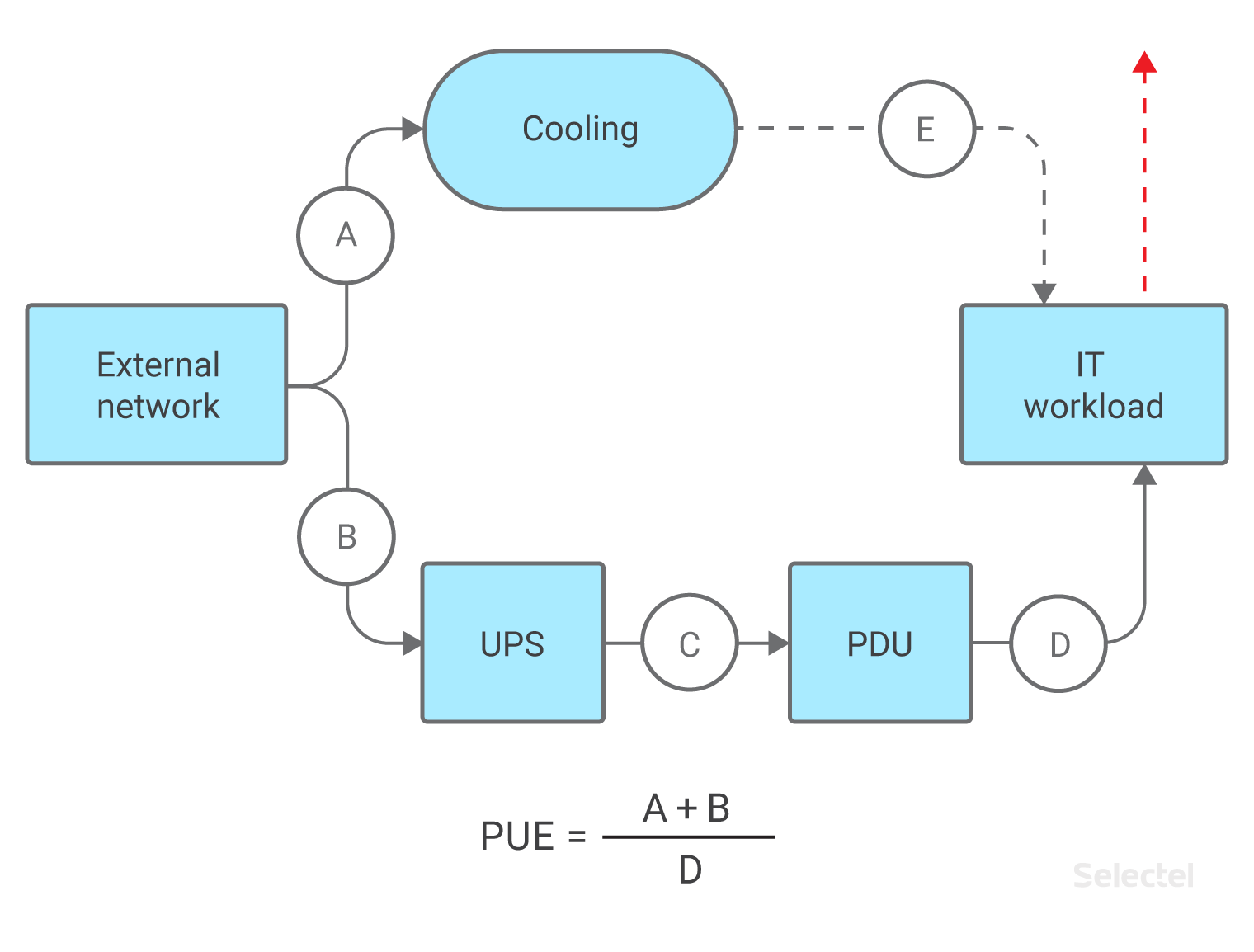 Free cooling determines pricing for a mining project. Before implementing free cooling, PUE at Dubrovka was 1.35.

Modernization and effective placement of CRACs in server and machine rooms let us lower expenses by 20%. By optimizing the cooling, power, and telecom infrastructures for the project, we were able to achieve a minimum PUE of 1.05 during the winter. As a result, infrastructure ownership costs dropped and prices for Selectel end products were reduced without any quality loss. The redundancy plan upholds the SLA. 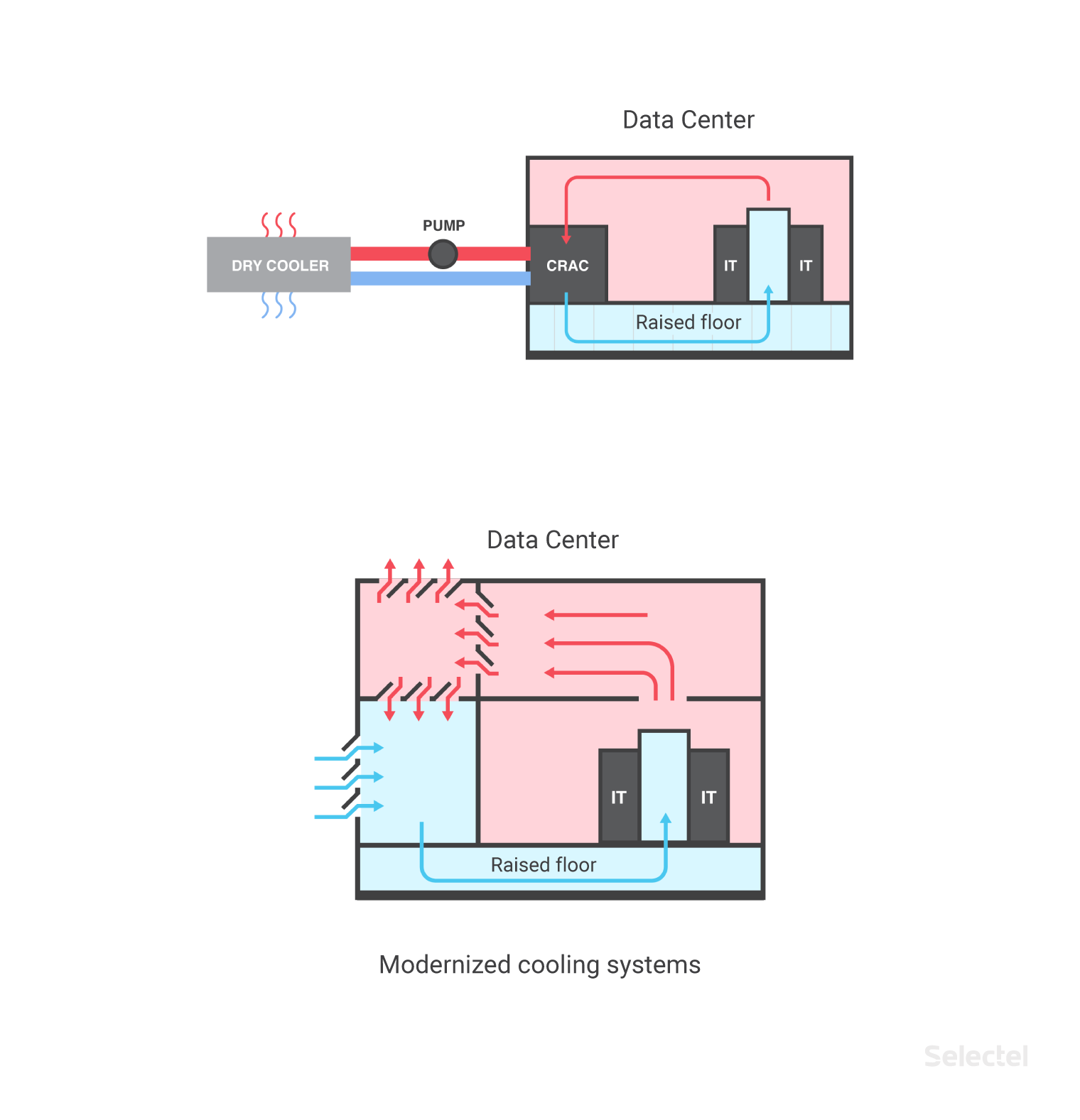 Implementing such energy efficient solutions also lets us talk about the project’s environmental impact. The less energy consumed, the smaller the footprint. For a number of reasons, ecological concerns aren’t as pressing in Russia as they are in Europe and the US. Nevertheless, this is a first step towards implementing “green solutions”.

Blockchain technology, the foundation that mining is built on, may become on of the key drivers for DC market growth. Along with big data and the development of the industrial Internet, distributed registries (Rus.) are the primary developmental trend in the Strategy of the Information Society Development in the Russian Federation for 2017-2030.

The application of and potential to develop these technologies in different economic branches are colossal: from forecasting to cybersecurity. The primary consumers now, for example, are financial structures.

Corporate players in the commercial data center market have already realized this and are ready to host non-standard mining equipment. Investment groups and businessmen are investing in the creation of new platforms in industrial complexes.

A recent project was businessman Aleksei Kolensnik’s purchase of two thermal power stations in Perm Krai and Udmurtia with the goal of housing a data center in one of them. The company Rucal also announced plans to build a data center out of the Nadvoitskiy aluminium plant in Karelia, which was advertised to be “the largest in the North-West”. Mining colocation is just one area that will be realized alongside developing platforms as commercial data centers.

Collective investment has become common practice for building farms, both among individuals and major corporations. This offers many opportunities for profit gain.

Oleg Deripaska’s En+ Group is poised to attract a pool of local and international investors to back the construction of a farm next to a major hydroelectric plan, proximity to which makes it possible to cut kW/h costs, although final consumption costs still haven’t been released.

A number of experts believe that the relatively moderate cost of electricity in Russia may attract miners from other countries, such as China, which is subject to strict legislation. Due to concerns regarding excessive energy consumption and financial risks, leadership in these countries have decided to put an end to mining activity within their borders.

Considering the legal vacuum surrounding mining in Russia, experts have highlighted a series of problems, including: unwillingness to transfer expensive equipment to another area, as well as the cryptocurrency exchange rate, which has significantly fallen recently.

Despite polar forecasts from analysts regarding bitcoin—from unrestrained optimism to predictions that it is just the next big bubble in the field of high technology—the new equipment has already made a real impact on the DC market with thousands of machines. Data center operators have run into a trend, which has new requirements and forced us to develop a road to realization.

Today, the demand for mining colocation in professional data centers has taken off with unheard of interest from the community.

A high level of risk for capital investments in equipment for and cryptocurrency does not freighen investors, but rather the contrary, has attracted new market players.

We mentioned to major developmental trends:

Only time will tell whether or not these business plans will be put into action. We’ll keep an eye on developing trends concerning industrial mining in the Russian DC market and shed some light on new Selectel projects.

One thought on “Mining in a Professional Data Center”